Chatbots – a botched play or a game changer?

A lot has been said and written about chatbots. After the Silicon Valley hype in 2016, the hue and cry over chatbots seems to have slightly died down now. Well, Facebook’s announcement of a 70% failure rate  dampened the expectations of most.  In fact, we tried a few of the bots on Facebook’s messenger bot platform, and while they were great initially, bots sometimes just don’t get it.

Microsoft’s Tay didn’t fare well either, with the bot running rogue on Twitter, sending out racist tweets after some of the users manipulated it. The other bots are in various stages of progress with majority of them not being able to process empathy, sarcasm and other everyday elements in human interaction.

Bots – the future of customer engagement

While Facebook’s announcement served as a major wake up call, the chatbots race is far from over. Gartner predicts that by 2020, customers will manage 85 percent of their relationship with a company without interacting with a single human. The era of Conversations as a Platform is rolling in. As Satya Nadella, CEO Microsoft said at the Toronto World Partner Conference event last year:

Chatbots fundamentally revolutionize how computing is experienced by everybody. Pretty much everyone today who’s building applications, whether they be desktop apps, or mobile apps, or websites, will build bots as the new interface.

Microsoft has certainly begun roll out, as could be seen on Skype. We spotted quite a few chatbots, ranging from weather, news, virtual assistant to games. To further prove that chatbots are far from over, Google has announced impetus to its AI and Machine Learning initiatives in the recently held Google I/O 2017 event. As more and more tech giants venture into the Chatbot landscape, the bot party is far from over. In fact, Markets and Markets estimates the Chatbots market to reach $ 3,172 Million by 2021.

How can businesses benefit from chatbots?

Omnichannel has been the war cry of businesses for a long time. Today, businesses connect with customers over websites, apps, social media, TV, Emails, etc. In the early 2000s, SMS was all the rage and businesses tapped it to engage with customers via notifications and promo ads. So heavy has been the onslaught that SMS is now perhaps experiencing the messaging equivalent of banner blindness. The latest medium to interact with customers, is where they spend the most of their time – Messaging platforms. Following the shift from SMSs to IMs, businesses can also jump onto the chatbot bandwagon to use messengers for customer interaction.

Three main ways in which businesses use chatbots:

Giving out routine information. Chatbots can dispense frequently asked information. Instead of flipping through FAQs, customers can quickly state their requirements and get answers from the bot.

Helping customers discover and order products that best suits their needs. We used this Yatra Bot to check for flights tonight from Bangalore to New Delhi. 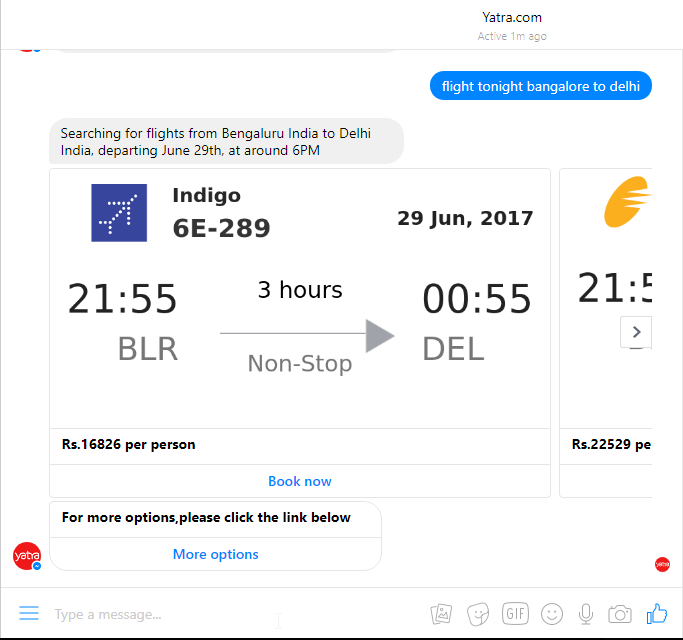 Helping make quick payments via secure gateways. Payjo is an Indian bot on Messenger that helps users recharge prepaid phones online and pay for DTH and postpaid bills via bot. 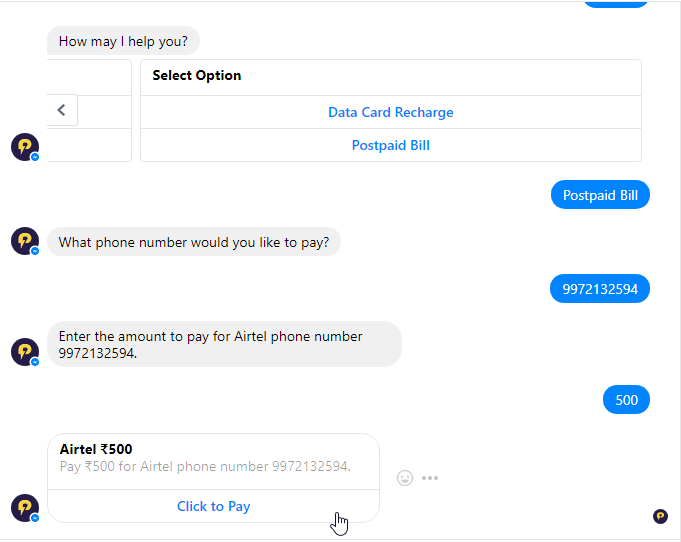 These are just three use cases of how businesses can use chatbots. There are hundreds of scenarios that are being tackled daily, with more bots joining the rank.

Benefits of using chatbots are:

While chatbots are in primitive state (as far as this technology is concerned) and need lots of improvement to be widely used, we are on the right path towards increased customer engagement. As AI technology develops, chatbots will have a better understanding of human nature and converse at par with humans. It is too early to say, but one day we just might be able to get them pass the Turing test with flying colors, and be worthy of the Loebner Prize.

At AgilizTech, we believe that chatbots are going to be the medium of B2C and B2B conversation in the near future. We’re exploring this exciting new realm of possibilities and are gearing up to leverage AI and Machine Learning to build revolutionary chatbots.

CONTACT US
July 18, 2017 Vinita Jagannathan Uncategorized No comments yet